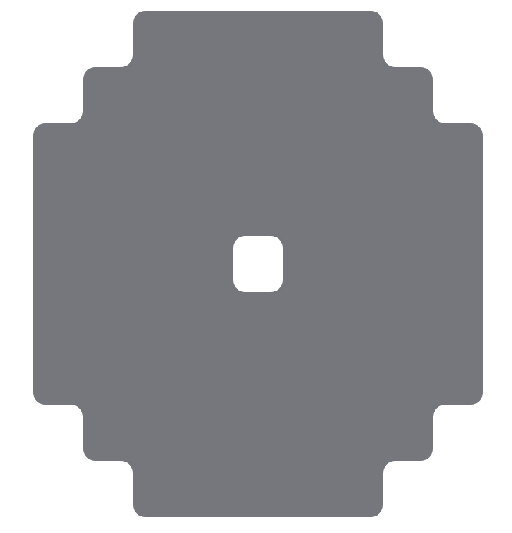 RoundedCornerTileSet programmatically creates SpriteKit SKTileSets suitable for use in any app or game that require a background grid with rounded corner tiles (for example, Match-3 games).

The reason for using SKTileSets in my match-3 game was irresistable. I wanted the performace gains of using 1 SKNode for a background grid, instead of 81 (as it turned out it turned into to 2 nodes … but still.)

Plus, I found it very cumbersome to add tile sets using InterfaceBuilder. So I decided to create mine programmatically.

Download from GitHub and add the files in the ‘Sources’ folder to your project.

The easiest way to learn RoundedCornerTileSet is to examine the Example-macos sample app.

Basically this method takes a 2D Array of Integers (columns,row) which defines which grid cells contain a ‘filled’ tile, and which do not.

First it creates the SKTileSet:

then creates the SKNode using:

where ‘grid’ is an Array2d

(The Array2d generic is from raywnderlich/swift-algorithim-club)

A sample atlas is provided in Example-shared. Not including alternate resolutions (@2X, @3X, etc…), it contains 32 .png files. 16 for tiles that are ‘filled’ and 16 tiles for those that are empty.

The files in the atlas are named following the convention:

For example: ’rounded_1111.png’ represents a tile where all four corners are rounded.

Similarly, ‘inset_1111.png’ represents an ’empty’ tile where all four corner are inset with a rounded corner.

You can. But an easier method would be to use the svg files from Example-shared and modify them accordingly.

You can easily change the size of exported .png files with multiple resolutions using Svg to Png