A Swift framework with some common extensions and functions

Various extensions and functions. Some are written by me, some are collected online. And some are variations.
This framework is supposed to give you a faster start with your project by combining some useful and often used code. Includes few UI classes extending UILabel as well since extensions for UILabel could not provide this functionality.

This framework is base for some other frameworks I provide, whilst as alone, it doesn’t offer that much.
Sorry, that it has grown to massive. Originally my frameworks were more fragmented around; but since most of names that I had chosen for my Frameworks, were already selected, I decided to merge most of my work to this single framework. Anyway, at the end, it’s easier to import one module instead of ten…

LocaleKit framework was merged with CommonKit since release 1.2.3.
LocaleKit allows App wide fixed locale to be defined and also provides some extended functionality to Locale as well while providing some simple data formatting options.

My NumPad framework was merged with CommonKit since release 1.2.4.
NumPad is a numeric keyboard (with some styling options, for example, phone style) which works on both, iPhone and iPad. Also provided is a DoneBar, ready accessory view with Done button for keyboards without Enter button.
Example is provided.

CurrencyKit framework was merged with CommonKit since release 1.2.9.
CurrencyKit is a money presentation framework for Swift.

NumPad class provides a NumPad style keyboard for iOS platforms with some styling properties.
Class can have type set to one of following types:

NumPad can be styled with following attributes:

Donebar is a fast UIToolbar initializer with Done button aligned to right. 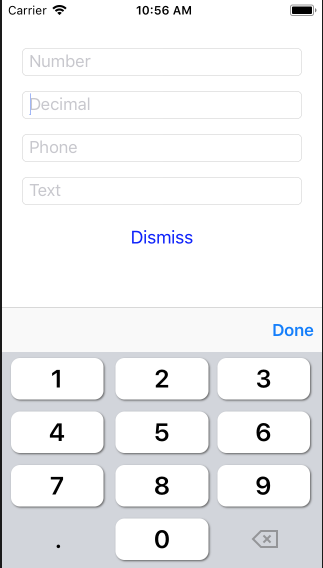 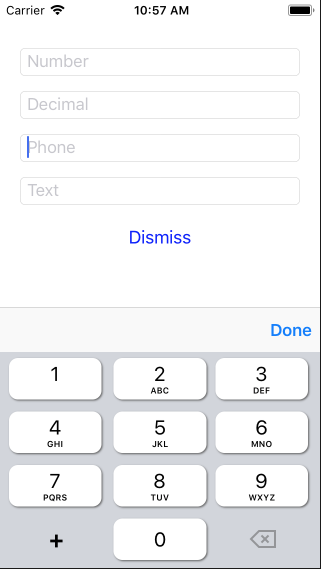 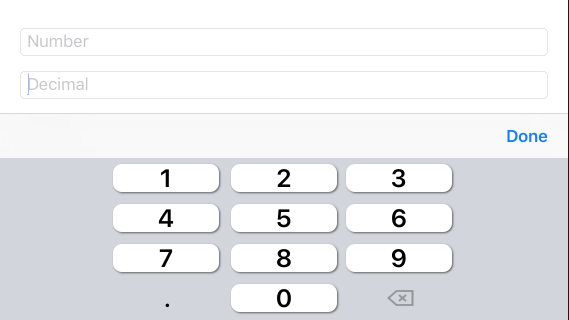 Can be used for:

What it doesn’t have:

If I need more? What keyboard is in the picture?

It is CurrencyPad provided by this framework. Works on both, iPad and iPhone.

Keyboard works a bit like a calculator, could I get cursor and make it work by standard keyboard or get it a bit less bulky?

Sure you can, but then you will need to implement this by on your own. I am happy with it’s current implementation at the moment.

What type of storage is used for storing money value?

I used Decimal. And Money struct conforms to Codable.

Can I sum different Money structs?

Yes, in Cart/CartItem. Money is always money, so it doesn’t care about if one part of it is used for taxes or something.
With VAT, you can get amount of VAT for sum, VAT0 sum, and sum with VAT multiplied by amount of items. And ofcourse, used VAT percentage of CartItem.

What else is in CartItem besides price?

Can I see some tests? 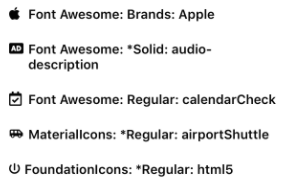 True… But it ain’t that much better from v4, which also had tons of icons, so if you have a project already using v4, updating to this maybe won’t make a significant change, icons still are what they are and sometimes more isn’t better.

What else is provided?

One can assume that you support all kinds of UI elements with this?

Sorry, but no – I only made a custom UILabel subclass. Maybe you’d like to fork this and make some add-ons? Good ones definetly are welcome :)

There propably is a string parser which parses for FontAwesome style css references to icons and returns a AttributedString?

Yes and no – There’s a parser that returns single icon as AttributedString, but you cannot use it like this:
"Text with fas-address-book picture."
This will work: "fas-address-book".
Again, for solution, maybe you’d like to contribute in this as well by forking this?

How do I use UITitleLabel

Just as UILabel but it has some more properties. Check the source, here’s a quick study:
UITitleLabel.title = text part of label ( on the right side of icon )
UITitleLabel.icon = icon part of label ( always on the left side of text )
UITitleLabel.textOverflows = a boolean determining how to display label’s contents. If false, text should always indent so it starts from same position as first line, if text has wraps to multiple lines. If true, text overflows on the next line to start from elements leading coordinate instead.

icon is type of compatibility class, which means there can be multiple ways to fill it in – provided ways are addressing directly to font -> icon, and string parsing to font -> icon. You can make more ways if this isn’t sufficient.

How do I address fonts to icon?

Apple suggests that I change my project’s Info.plist to list included fonts, should I now do that?

It’s up to you, but if you use this with provided implementations (instead of addressing fonts directly with UIFont initializer) or atleast, first time access them like this, I have provided a automatic resource loader for fonts.
If you want to use them directly, initialize them first with underscore as variable name, after this, they are usable directly from UIFont initializer – or you can make appropriate changes to your Info.plist, once again, it’s up to you.

Yes – it’s not perfect. It’s just something to get you started – some icon names might need tweaking due to Swift syntax not allowing ones that came from generator. Enumerations provided by me already contain necessary changes.

PhotoPicker and PhotoPreview are classes which allow you to present a photo picker with possibility of selecting multiple assets at once, PhotoPrevies is a photo displayer class. These both utilize provided AlertController. Camera support (if device has a camera, simulator doesn’t) is also supported in PhotoPicker. Recording or picking a video is not supported by this system, only stills. Camera interface includes common controls.

ConditionalInit protocol is very handy when you need a lazy class (yes, class, because this one requires something that has init), but cannot use lazy because you want to in control and need to reset it once in a while. There are other ways to do this as well, like initializer function which is executed lazily, but here’s another approach.
Before:

Or you can even have a creator function for it:

It is extended only to optional NSObject classes, so you cannot use it to non-optional classes.
Saves some writing if you use a lot of these..
Introduced since release 1.4.2.

Yes- much more. This is actually quite a big pod with lots of stuff.

Included resources(fonts, etc) might be under influence of different licenses. Some code, especially AttributedStringWrapper, was not created by me. It was provided from 3rd party framework by loopeer: https://github.com/loopeer/AttributedStringWrapper
Some parts of code can be considered more or less public domain, since ideas or even full implementations might have been derived from forums like StackOverFlow.

CommonKit is now available through CocoaPods.
Here’s a sample Podfile: